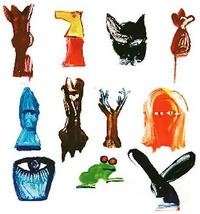 Within the foyer of the Merrylees library is a redesigned exhibition space currently showing eight CSU Art Collection artworks. They are all Monotypes.

The Monotype is the simplest form of printmaking (and therefore nearly all printmakers, and many painters, have produced them at some time), where typically an unincised plate is painted, or drawn upon and impressed on paper with the help of a printing press, roller, the back of the hand, or a knife, producing a reversed image of the original painting/drawing. The image is not reproducible. Another pressing is generally possible depending on the viscosity of the painting medium, however, they are referred to as cognates or ghosts, because of their reduced intensity, and colour values. Edgar Degas produced the best documented and exhibited works in this medium.

The works on display are all Australian, and range from the bright, bold, Charles Blackman Alice symbols c.1984 (depicted above), which is reminiscent of the artists stage sets, or graphic schemes for theatre production to The Mopoke, 1960 by Clifton Pugh, a small work produced before he is documented to have executed any monotypes, or the contemporary little colour field Wayne Viney landscape Rising Cloud 1, 2004.

Other works in this exhibition include the two marvellous immersive, unique prints, of ‘Cuisenaire rod’ like layering, by Orange born Sydney resident, David Serisier both entitled Large Vertical, 2001 and Zantedeschia, 2003 a floral depiction by Cameron Fraser, whose carborundum monotypes on paper adhered to canvas stretch the definition of a monotype. Other works include Wing V (Version 1), 1992 incorporating Tromp-L’oeil alleyways by Pam Debenham; a Canberra based artist and lecturer who campaigns against nuclear weapons, and for women’s rights within her art, and the 1955 transfer monotype Cats by the late Brisbane artist Jon Molvig; who’s monotypes were inspired by the freedom within the work of Ian Fairweather.

The work The North Door by Tom Garrett ends the small show. He was a prolific monotype artist, who admired the watercolours of Blamire Young, and J.J. Hilder. The artists depicted a gentle, almost saccharin world of washes of colour, textured walls, and fuzzy-wuzzy vistas. Garrett is one of the few artists in Australia who’s body of work in the medium was exhibited, during his lifetime, and respected the public. Other notable examples include Rupert Bunny, Margaret Preston, Anne Lord, John Peart, Graham King, Murray-Walker, and Bruno Leti.