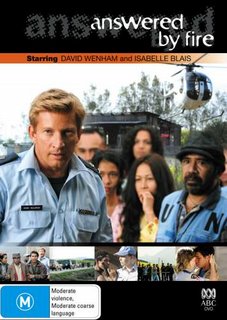 The brilliant drama Answered by fire, that was recently screened on the ABC, is now available in the Library collection. The joint Australian-Canadian production stars David Wenham and Isabelle Blais

Inspired by true events, Answered by Fire is a story of history in the making – of people fighting for their country’s freedom, and of those who vowed to protect them, but were forced to abandon them. In 1999, after 24 years of forced occupation, East Timor won the right to vote for independence from Indonesia. The ballot would be supervised by the United Nations. The UN promised the East Timorese that they would stay after the vote, regardless of the outcome. It was a promise they couldn’t keep. (DVD publicity blurb)