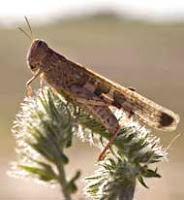 The ABC Rural website recently featured an article about outbreaks of plague locusts in NSW and Victoria.

“Landholders in central and southern New South Wales and northern Victoria have been urged to keep reporting plague locusts outbreaks.

“In New South Wales there have now been around 700 confirmed sightings of the pest.

“In Victoria, there have currently been 25 confirmed sightings of the Australian plague locust in the north of the state.

“Large bands of locusts have been found in the Riverina and Central west of NSW. Plague locust commissioner Graeme Eggleston is worried farmers aren’t reporting the hatchings.” [You can read the rest of this article on the ABC Rural website]

The Department of Primary Industries’ Agriculture website features a variety of resources about locusts including information about: the current situation, controlling plague locusts, use of chemicals & pesticides, and program and control strategies.

You can find all this information and much, much more on: