Search
3D is the new black – it’s everywhere at the moment. 3D TV, 3D movies, 3D video games etc. If the advertisements are to be believed, the addition of the Z axis and depth perception is the most important development in the history of mankind.
3D TV in Australia has backed the 2 biggest sporting events of 2010, State of Origin and the FIFA World Cup to sell to the masses. Avatar brought 3D back to cinemas, and it now seems like every blockbuster or family movie will be in 3D (Clash of the Titans, Shrek, Toy Story & Tron for example). Meanwhile Sony’s Playstation 3 is now capable of 3D display and is banking on big franchises such as Killzone, Gran Turismo, Crysis and Mortal Kombat to entice gamers to make the switch.
If you’ve seen 3D, you would surely have seen the glasses. If they aren’t a shining endorsement for avoiding the third dimension I’m not sure what is. Check these things out:

But what if we could view stereoscopic 3D without the glasses?
Enter the Nintendo 3DS. A new portable gaming machine that displays in stereoscopic 3D without the need for glasses. In addition, this machine has a 3D slider control to increase or decrease the intensity of the 3D imagery. ‘How does it work?’, I hear the masses ask. While the technology hasn’t been officially detailed, we’d have to assume that it involves some kind of optical trickery.

Dominant Colour Test
What colour are the arrows? Your initial answer will help determine your dominant colour.

Afterimage
Stare at the black dot in the middle of the flag for about 60 seconds. Then look at a white piece of paper. The true colours of the flag should magically appear. 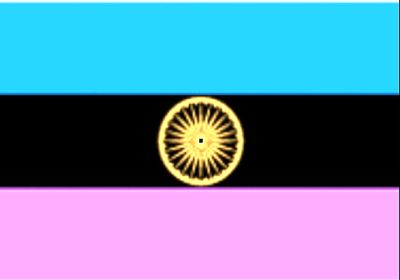 Rotation Illusion
Which way are the red stripes spinning?

Disappearing Illusion
Concentrate on the below image. Do you still see the yellow dots?

So the question remains – Will you wear those silly 3d glasses? Is stereoscopic 3D the final frontier in terms of entertainment displays? And can you really trust what you are seeing?