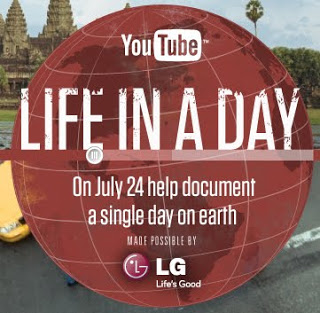 Life in a Day is a historic cinematic experiment in the making – a collaboration between producer Ridley Scott (of Alien and Gladiator fame), director Kevin McDonald (State of Play and Last King of Scotland), Youtube, and the 6.8 billion people on Earth.

The idea is simple. A user-generated feature film, shot in 24 hours by you. On July 24, you will have 24 hours to capture your life on film – the most compelling footage will be integrated into Life in a Day.

Those who have their footage included will be credited as co-director when the film premieres in January 2011 at the Sundance Film Festival.

For all the details, see http://www.youtube.com/lifeinaday