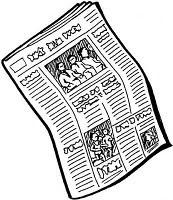 Curt Degerman was a common sight around his Swedish town. He was often seen riding his bike or foraging through garbage cans, collecting bottles and cans to be recycled. When he passed away in 2008 at the age of 60, most thought that he had left nothing of any value behind.

When it came time to sort through Curt’s estate though, it was discovered that he had earned a fortune totaling nearly $ 1.4 million, leaving it all to a cousin who was kind enough to visit him occasionally in the years before his death.

Curt Degerman made his investments after a life time spent studying Swedish newspapers. He was a frequent visitor to the town’s public library because he wouldn’t buy newspapers, so instead he utilised the free resources at the library and poured over the financial columns. From doing this he became an expert on the stock market, investing the modest sum he earned from recycling in stocks and mutual funds, valued at close to a million dollars.

Upon discovering the wealth of Curt Degerman after he passed away, his extended family contested the will. The battle was eventually settled outside of court for an undisclosed amount. Read more here